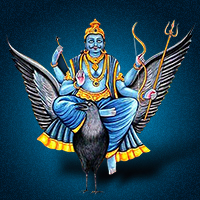 Shani is embodied in the planet Saturn and is the lord of Saturday. Shani is also known as 'Sanaiscara'.
The word 'Shani' comes from Sanaye Kramati Sah (the one who moves slowly). This is because Saturn takes about 30 years to revolve around the sun. It is said that when Shani opened his eyes as a baby for the very first time, the sun went into an eclipse, which clearly denotes the impact of Shani on astrological charts. He is known as the greatest teacher and well wisher for the righteous but also punishes those who follow the path of evil.

Graha is the 'cosmic influencer' on the living beings of mother Bhumidevi (Earth). The Navgraha are some of these major influencers. The Navgraha includes -- Surya, Chandra, Mangala, Budha, Guru, Shukra, Shani, Rahu & Ketu.
The placement of the nine planets in the Horoscope points out the karmic influence on the behavior of the individual. It is believed that chanting peaceful mantras or even listening to them helps to get rid of negativity and spreads positive energy.